In at the Deep End - Summer Isle Films

In at the Deep End

In at the Deep End

We have been working closely with Suffolk Family Carers over the last few months on a campaign to raise awareness for young family carers.

Suffolk Family Carers is an established charity, helping family carers of all ages across Suffolk get the support they need to live fuller lives.

We were approached by the charity to work on a film to creatively promote young family carers and how Suffolk Family Carers can be there to help and support individuals and families in need.

Rising star Jade MayJean had previously contacted the charity and donated a single ‘You Let Me Breathe’ off her new album ‘20SIXTY’ to accompany the film.

Our short narrative film will follow the day in the life of a young family carer finishing on the positives and rest bite that Suffolk Family Carers brings to these young peoples lives.

After researching films made on a similar theme, we wanted to keep the production value simple with the focus on big images and classic cinematography techniques, wides and close-ups. The pacing of the story being relatively slow accompanied with a dull colour grade progressively getting brighter towards the end of the film as the positivity builds.

We also had to think about giving Jade a cameo, so we decided to give ourselves a real challenge and do something a bit different. 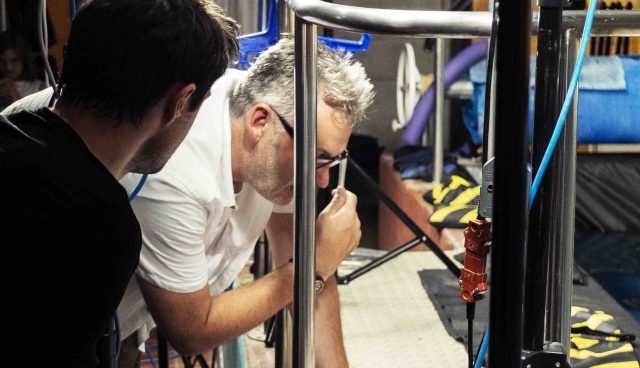 The story we are telling can be ‘suffocating’ for some until you get help. So we decided that metaphorically having Jade underwater would subconsciously work with our narrative. Its the traditional method of pulling our audience out of the story and back in again.

This sounds great on paper, but presents so many challenges in production, plus not forgetting we a have a budget to work inside.

Thankfully we have a great venue in Ipswich called Diveline. Diveline hold diving lessons in their own purpose built pool and they kindly let us turn it into a shooting studio for a day.

Lots of research went into how we wanted this to look, mainly on lighting, when you go underwater everything gets darker. We toyed for weeks whether we needed underwater lights, or wether we could get the effect we wanted from shooting lights down in the pool. We decided to shoot lights down and sink Jade backwards into the pool which would make lighting a bit easier.

This also presented the issue of what you see in frame. Shooting in a pool is great if thats the look you want to go for, but not what we wanted with this. Jade was our focus and we wanted her to look like she was in the ocean, rather than a blue tiled pool. So we had to look at using drapes. This sounds easy but actually harder than it looks. Black theatre drapes were an option, but would have been too heavy to drape in the water. Black tarp was also a thought but this then would be too shiny and reflective. After more research we found that weed block canvas was a viable option. Its light, waterproof and not reflective. We rigged strips of this to copper pipes with weights on and dropped them down the sides of the pool.

We decided to shoot on the Sony A7s mark 2. Great in low light and a decent camera to accompany underwater rigging which we had to source.

With the help of Rich from Waterproof Media, we custom rigged our Sony A7 to a Nauticam Housing with a monitor for the underwater filming. We also had a wired feed to the surface for our Director Craig and lighting tech Nathan to watch and adjust the shots. 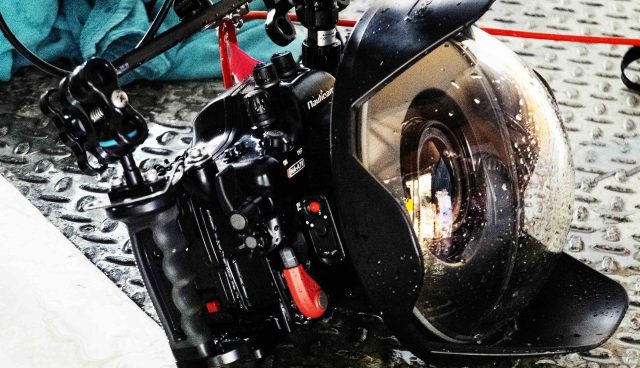 Lighting had to be carefully positioned around the pool and secured.

We had two qualified divers in the pool for the filming, fortunately our drone pilot Steven is a qualified diver and he assisted our DOP Tom Rout with the deeper shots.

Jade wore a floaty dress and had to hold her breath for long periods, this was very exhausting but she was a superstar and dealt with the underwater scenes exceptionally well. 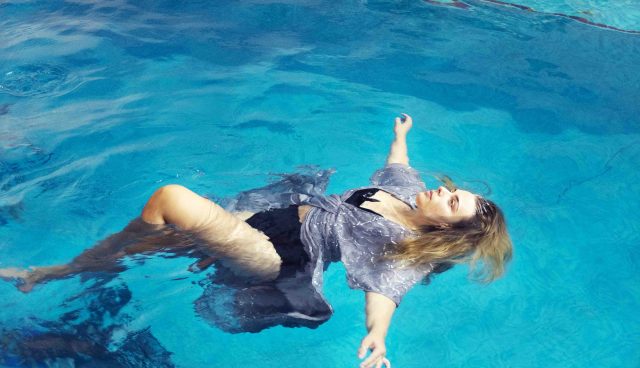 The day was a success and the footage is stunning. Now on to auditions for the main part of the film which will be shot over September/October with the release planned for January 2019. Watch this space.

For film and video production Ipswich and the UK visit – www.summerislefilms.co.uk

Photos by the lovely and talented Ben Driver